Sexy manga girls take the place of angelic muses and cynically comment on stories of decadence in their cartoon bubbles. They lament the contradictions and decline now shaping society. These damsels were once elegant deities celebrating the climax of earthly and spiritual beauty. By now they are skeptical mermaids and sibyls from the Internet who, careless, no longer seduce their lost sailors.


Floating among fluffy clouds, the beautiful ladies tell stories in under 140 characters. The ironic words are forever engraved in a 17th-century mirror, rather than disappearing in an infinite scroll of tweets


The Japanese figures belong to a time of emotional distress embodied in the age of the Internet. The online system already acts as a sentimental retreat—keeping a detailed memoir of everyone’s lives, collecting emoji flowers on Facebook memorial pages, and publishing conscious admissions of psychological disorders in public is part of an established behaviour. It is clear that the contemporary society is in need of an emotional recovery.


Bringing back a redundancy of detail and aesthetic sublimation from other epochs creates a sensory bridge for lost users. The Baroque nostalgia remains as emotional liberation in both a physical and digital reality. Exoticism, decorative caprices and anti-modernist coats of slush return as fetish from the past and new therapy against a constrictive and weakening system. Let’s treat the digital hypochondria with crystalline surrogates of petals and curled motifs. Cry pearls and sweat glass drops. Crystallise disappointment, embellish the critique.


This project has been realised with the collaboration of Ongaro e Fuga and VeniceArtFactory. 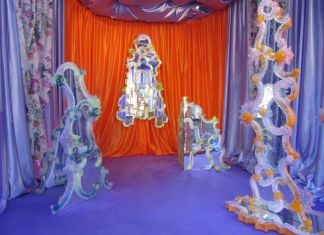