Joffe is known for her portraits, painted in a fluid, smooth style, in which she is able to capture the emotions, weaknesses and vitality of human existence. Her subjects are often female: girls, adolescents and women seen in different moments of life.
The artist depicts them with a gaze that is halfway between the immediacy of a snapshot and a situation of emphatic distortion

Leggi tutto
These studies on the human condition express no judgments, but appear one after the other with great energy and engagement, also thanks to the bold rejection of any formal order. The psychological intensity of the figures makes our very opinion ambiguous, disturbing and gratifying us at the same time.

With influences ranging from Piero della Francesca to Edgar Degas and from Francis Bacon to Alex Katz, Joffe has based her work on a direct and intimate observational relationship between the painter and her sitter. Mostly her subjects are family members and personal friends, sometimes images from historical figures or the mass media. She is also engaged in a series of candid, often searing self-portraits and tender double portraits with her daughter Esme. Whatever their origin, her subjects have the intensity and psychological richness of characters, like instants captured from the lives of literary heroines.

Within this subject area, Joffe experiments widely with form, color, texture and approach. The paintings swing between the poles of forethought and improvisation, as flurries of brushstrokes repeatedly clash and fuse across the canvass arena of action. Although drawing is important to her, she never delineates her forms, but rather allows color and shape to merge as a cumulation of her imaginative process. As she told The Independent in 2014: I paint to think.

A group of new pastels is collectively titled Family Pictures. Joffe has described the mesmeric and physical, arm-straining experience of their making, the thickly applied chalk accumulating with a dusty, luminous purity. There is a sense of democratic, mobile immediacy about these sticks of pigment, the looser strokes they occasion turning clothes, or the stripes of a beach hut, towards abstraction even as they retain the sense of gesture and place of their making. Here again, experience and artistic form, emotional connection and representation, are suspended in lively, irresolvable association on Joffes picture plane, which accommodates all manner of psychological and spatio-temporal complexities. 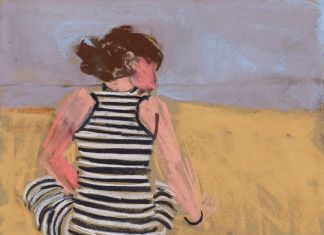