The Visual Research Support Foundation is pleased to present an exhibition of Ukrainian artist Zinaida’s multimedia work, Without Women, which will debut as a Collateral Event of the 59th Venice Biennale. The exhibition is curated by Peter Doroshenko.

Without Women, is an encompassing multimedia installation that Zinaida has been working on since 2017. It incorporates video, large-scale photography and perception manipulation to create a potent narrative of identity constructs, mythologies and past folklore

Leggi tutto
Filmed in the Carpathian Mountains in Ukraine, the artist captures traditional sheep herders and their masculine roles during their long and isolated treks through the vast countryside. The movement of the men and their labour, depicts notions of bonding, individualism, and isolation. Without Women is a manifestation of unknown micro cultures, current critical discourse, and the traditional societies in which we live. The work itself serves as a code for understanding contemporary cultural imbalances.

Curated by Peter Doroshenko, the exhibition in Venice will be presented in two parts due to difficulties faced with shipping elements of the work from war-torn Ukraine.

Opening to the public on April 23, 2022, part one of Without Women sees three major video works projected onto large-scale screens to form a triptych of living pictures. Each video documenting the monastic-like life of these men. Balancing between discernible acts of sublimation and a poetic portrayal of shepherds as solitary monks, the video narrative is complemented by tactile-olfactory elements within the exhibition space.

Part two of the exhibition will open one month after the current hostilities in Ukraine have ended. It will take the form of an accompanying large-scale, photo-based installation titled The Milk of Life. A work, highlighting the production of sheep’s milk and the symbolism attached to its regional sustentative purpose.

Zinaida recently elaborated, “Without Women shows that a person fully and vividly reveals their true nature when facing difficult conditions, the viewer feels the magic of that energy transformation when walking through the exhibition. The emphasis on the absence of women is in fact the symbolic presence of the invisible woman. Feminine energy alongside masculine being.”

Through distinctive interpretations of discoveries and rediscoveries within Zinaida’s artistic practice, Without Women is an expansion of the Biennale Arte 2022 title theme The Milk of Dreams. The artist’s intention is to continue assessing the dominating role of men in society and consider the complex relationships between humans.

In curating the exhibition, Dallas Contemporary Executive Director Peter Doroshenko has emphasised that “Zinaida is a national cultural figure for Ukraine. Over the last fifteen years, she has summarised, documented, and interpreted contemporary Ukrainian society through her work".

About Zinaida
For over fifteen years, Zinaida has incorporated photography, video, performance and installations into her art works. Born in 1975 in Kyiv, the Ukrainian artist became a cultural figure of the Ukrainian art scene providing a poignant perspective on the study of mythologies, national and archaic images and their conveyance in contemporary art. She has taken part in many international residencies including Kaldor Public Art Project, Australia, Marina Abramovic: In Residence. Solo exhibitions of her work have been hosted by the WhiteBox, New York; Shevchenko National Museum, Kyiv; PinchukArtCentre, Kyiv; Mystetskyi Arsenal National Art and Culture Museum Complex, Kyiv; among others. Her work was included in various exhibitions in Venice and numerous international and national museums, as well as commercial galleries, since 2010. 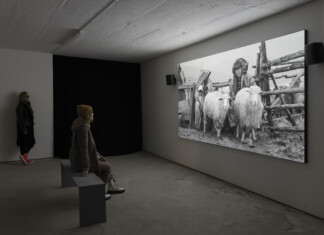