The display, curated by Milovan Farronato under the artistic direction of Edoardo Bonaspetti, is set up in the atrium of the Triennale and continues through to the Torre Velasca, in the "Acquario" space on the ground floor, hosted by Urban Up Unipol Project Cities.

The relationship between Fiorucci Art Trust and Nick Mauss dates back to 2012, when he was the first Artistic Leader of Volcano Extravaganza

Leggi tutto
In 2014, Mauss also conceived By, With, To & From, the first-ever commission for the Trust's former HQ in Sloane Avenue, which challenged the domestic architecture of the site with a series of jagged agitations, in order to modulate viewers' navigation of the space.

Nick Mauss (b.1980, New York) operates in a hybrid manner across drawing, sculpture and performance. In the last decade, Mauss has been expanding his artistic practice to also encompass the role of curator, choreographer and scholar. "I mean choreography," says Mauss, "as a way to organise and rearrange, to work with media in time, to find new forms and sequences, as well as to revive historical material in the present." In spring 2018, Mauss will present a solo show at the Whitney Museum of American Art, New York, US.
Illuminated Window is Mauss' first solo exhibition in Italy. Hinting to a window illuminated like a medieval manuscript preciously decorated by hand, the title refers both to an ideal visual perspective as well as to illustration.
Within the show, two very distinct modes of fruition of the space take place. At La Triennale Mauss created a site-specific intervention: a dispersed painting constructed like a mural, made of scattered quadrangular and rectangular ceramic tiles which alternatively touch and juxtapose each other, creating a non-unitary, graphic configuration of recurrent colours. The original drawings are consciously betrayed by Mauss' production process, by the stratification of illustrations overlapped in the intervals of the firing phases of the ceramic glaze: figures and movements that repeat themselves, colliding with backgrounds and recurring ornamental motifs to conquer the foreground.
Venturing towards new landscapes of expression, the exhibition continues at the historic Milanese landmark of Torre Velasca, where Mauss designed a new, metaphorical stage. The display becomes a 24/7 illuminated visual frame for the exhibited works, as if these latter were as many different characters, whose narratives organically unfold along a choreography envisioned by the artist. The presentation is also sustained by a selection of lighting and furniture realised by the iconic Studio BBPR⎯the designers of the building.

Illuminated Window is a project by La Triennale di Milano realized in collaboration with Urban Up Unipol Projects Cities with the support of Fiorucci Art Trust, London and Galleria Campoli Presti, Paris/London. 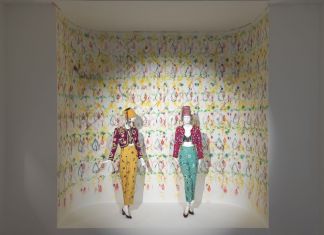